Fireside Chat with John B. Emerson: The Power of Diplomacy 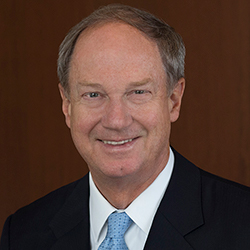 On January 20th, 2017, John B. Emerson, until then the US Ambassador to Germany, and his family boarded a plane from Berlin to their home in Los Angeles, California. It was the day of the inauguration of Donald J. Trump and the beginning of what many would later call a very new chapter in the transatlantic partnership.

John Emerson is vice chairman of Capital Group International, Inc. He most recently served as the United States ambassador to the Federal Republic of Germany (2013-2017). In 2015, John was awarded the State Department’s Susan M. Cobb Award for Exemplary Diplomatic Service, which is given annually to one non-career ambassador, and in 2017 he was awarded the CIA Medal and the U.S. Navy’s Distinguished Public Service award. Previously, John was president of Private Client Services for the Capital Group Companies (1997-2013); deputy assistant to President Clinton in the White House (1993-1997); Los Angeles Chief Deputy City Attorney (1987-1993); and a partner in the law firm of Manatt, Phelps, Rothenberg and Phillips (1978-1993). Ambassador Emerson currently serves as Chairman of the American Council on Germany and on the boards of the Pacific Council on International Policy, the German Marshall Fund and the American Friends of the Munich Security Conference. He is a long serving member of the Council on Foreign Relations, and for eight years chaired the Board of the Los Angeles Music Center (2003-2011). John holds an honorary doctor of laws degree from Hamilton College, a juris doctorate degree from the University of Chicago and a bachelor’s degree in philosophy from Hamilton College.

The link for the Zoom meeting can be found under https://daz.org/events/power-of-diplomacy/.